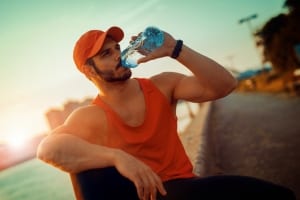 According to drugrehab.org, “Alcohol is ingested orally and travels through the esophagus to the stomach. Alcohol requires no digestion before it enters the bloodstream. If the stomach is empty, twenty percent of the alcohol is absorbed through the stomach walls into the bloodstream and begins to affect the brain within a minute. For this reason, many alcoholics prefer to drink on an empty stomach. Although the esophagus is only the tube through which an alcoholic drink passes on its way to the stomach, half of oral, esophageal cancers and laryngeal cancers are related to regular drinking. The remaining alcohol makes its way to the small intestine where it is also readily absorbed”.