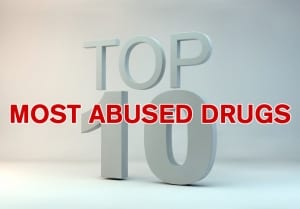 Recent statistics show that there has been a slight shift in the top 10 most commonly abused drugs. The most noteworthy is marijuana, moving from 3rd place to 2nd place recently. Most speculate this is due on part to the legalization of recreational marijuana in many parts of the country.

1-Alcohol: The CDAC notes that, “with over half (51.8%) of U.S. population identified as drinkers, alcohol is the #1 most abused substance. Nearly a quarter of the population participates in binge drinking (58.6 million), and 6.7% of the population reported heavy drinking (16.9 million). As a depressant, alcohol produces impaired coordination and judgment, slurred speech, and blackouts.”

2- Marijuana: Marijuana is the #1 most abused illicit drug and the third most abused drug according to the CDAC. The CDAC reports that, “the dried parts of the Cannabis plant can cause distorted perceptions, impaired coordination and problems with learning and memory.”

3- Tobacco: At least one quarter of Americans (6.9 million) are users of a tobacco product making it the second most abused drug. Many individuals are drawn to smoking because it stimulates the pleasure centers in the brain and turn on the body’s natural chemicals that produce euphoria. Cigarette smoke contains over 4000 chemicals, causing long-term systemic effects. These risks include high blood pressure and smoking has been proven to increase the risk of cancer.

4-Prescription painkillers: The abuse of prescription drugs is on the rise and has moved up in ranking to be the fourth most abused type of drug. Painkillers, such as Vicodin and OxyContin, are the most abused prescription drugs. These drugs can produce effects similar to heroin. Painkillers can have negative effects on the physical body causing heightened sensitivity to sound and light, hallucinations, blackouts and problems with the lungs, central nervous system, stomach, intestines, liver, kidneys, heart and death from overdose.

5-Cocaine: Although cocaine gained popularity back in the 1980’s, it still remains on the top 10 list of most abused drugs: listed as the fifth most abused. According to the CDAC, nearly 1.5 million people in America are current users of this white powder. Cocaine use results in severe psychological dependence and intense drug cravings. This is due to cocaine’s short-lived yet powerful effects of euphoria. With cocaine, tolerance builds quickly, making it more dangerous.

6- Prescription Sedatives: The most common sedatives are benzodiazepines and tranquilizers. Approximately 2.4 million people in the U.S. are using sedatives for non-medical purposes. These are highly addictive and can cause memory loss, poor motor coordination, paranoia, stupor, suicidal thoughts, aggression, respiratory depression and coma. Mixing sedatives with alcohol is very dangerous and can cause death.

7- Prescription Stimulants: Prescription stimulant drugs have a high addictive rate and about 1.2 million Americans are currently taking prescription stimulants for non-medical purposes. These stimulants, such as Ritalin or Adderall, are usually prescribed for people who have narcolepsy or ADHD. These drugs increase the level of dopamine in the brain causing feelings of euphoria. Abuse of stimulants can cause heart attacks, strokes, depression, malnutrition, hostility and paranoia. Because stimulants increase energy and focus, teenagers are abusing the drug because they believe it will enhance their learning and test scores. The abuse of these drugs has increased significantly on college campuses across the country.

8- Hallucinogens (LSD, ecstasy): Approximately 1.1 million people are currently taking hallucinogens in the U.S. Hallucinogenic drugs are known as PCP, mescaline, Ecstasy, LSD and psilocybin mushrooms. These drugs cause hallucinations and profoundly affect the perception of reality. Some negative effects of using hallucinogenic drugs are delusions, paranoia, panic, terror, despair, psychosis, and psychological illness. Flashbacks from some of these drugs may occur at anytime after using the drug. LSD is reported to be the most popular hallucinogen among users. LSD, also known as “acid,” is the most potent hallucinogen in the world. It is often sold on blotting paper, or “window panes.” The effects of LSD are unpredictable, altering the user’s mood, personality, and sensations of reality. (CDAC, 2012).

9- Heroin: Heroin is known as the most powerful and addictive drug in the world and its use is increasing in the U.S. Heroin induces euphoria by binding to the opioid receptors that control consciousness, breathing and blood pressure. Long-term effects of using heroin include collapsed veins, partial paralysis, memory loss, intellectual impairment, and disease of the heart, liver and kidneys. Heroin is often diluted with other substances creating a high risk of physical complications and death. It is made from poppy plants and is a highly addictive opiate. It can be injected, smoked, or sniffed and creates a feeling of a euphoric rush. Users feel an increased ability to communicate easily with others, and report heightened sexual performance.

10-Methamphetamine: The tenth most abused drug is methamphetamine, also known as meth, crank, or speed. Although last on the list, it shouldn’t be ignored. Meth is popular among young adults. Meth produces feelings of well-being and energy which can last from 4 to 16 hours. Because of its lasting effects, it is a popular drug for both parties and nightclubs. Meth is highly addictive, and burns up the body’s resources and can cause permanent damage to the brain and body. 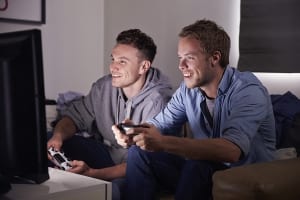 A recent study found that individuals with attention deficit/hyperactivity disorder (ADHD) are very likely to develop video game addiction due to using video games to escape from the effects of ADHD. The study, which was conducted at the University of Bergen in Norway, was published in the Journal Psychology of Addictive Behaviors, of the American Psychological Association.

Each of the 20,000 participants in the study answered questions about their video game behaviors and use.  In order to determine if video game addiction was present, 7 factors were evaluated. These measures included:

The researchers based their findings off the assumption that if an individual related to at east 4 of the 7 criteria, they were likely to have a video game connection.

Further, the study evaluated the participants for ADHD and found that those with ADHD and other psychiatric disorders like obsessive-compulsive disorder (OCD) and depression were more likely to be addicted to video games. The researchers indicate that the video games function as an escape mechanism from the behavioral disorders and can develop into an addiction.