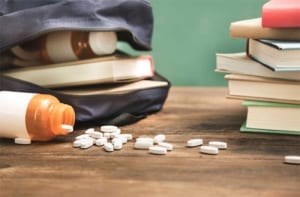 With all of the media focus on opioid addiction and prescription painkiller regulating, other drugs that are addicting get overlooked, like Ritalin.  Ritalin is often prescribed for Attention Deficit Disorder (ADD) or Attention Deficit Hyperactivity Disorder (ADHD).  It helps with focus and attention.  Recently, Ritalin abuse has been seen on college campuses where students are taking the drug (and often becoming addicted to it’s effects) in order to study longer and more effectively or to test better due to improved focus.  However, many do not realize the addictive nature of Ritalin and the risks associated with taking it when it’s not necessary.

For instance, when individuals who have not been prescribed the drug continue to take Ritalin in order to avoid withdrawal symptoms, when they can’t meet their obligations without Ritalin use, and/or feel intense urges to take Ritalin they are definitely experiencing signs of addiction.  Further, if individuals find themselves increasing their Ritalin dose over time to maintain the same effect, take Ritalin in situations where it may not be safe to do so, or are spending a lot of time obtaining, using, and recovering from the effects of Ritalin, those symptoms are also red flags of addiction as well.

Treatment for Ritalin addiction is similar to other drug addiction treatment.  Detox needs to occur in a safe medically monitored supervised setting.  Following up with therapy and counseling can then strengthen the individual against returning to Ritalin abuse and addiction.