Many people with mental health disorders attempt to alleviate their symptoms by taking drugs. One of these disorders is paranoia. Paranoia can be defined as “intense anxious or fearful feelings and thoughts often related to persecution, threat, or conspiracy” 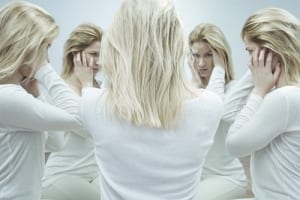 . Paranoia occurs in many mental disorders, but is most often present in psychotic disorders. Paranoia can become delusions, when irrational thoughts and beliefs become so fixed that nothing (including contrary evidence) can convince a person that what they think or feel is not true. When a person has paranoia or delusions, but no other symptoms (like hearing or seeing things that aren’t there), they might have what is called a delusional disorder.  Because only thoughts are impacted, a person with delusional disorder can usually work and function in everyday life, however, their lives may be limited and isolated (mentalhealthamerica.net).”

Sometimes it’s hard to detect the signs of paranoia but they include intense mistrust or suspicion, fear, anger, and betrayal. Some paranoid individuals appear hypervigilent, can’t forgive others, and very defensive, worry excessively about hidden motives, can’t relax and argue more often than normal. Helping a loved one overcome or deal with paranoia effectively can be trying and very difficult. Reaching out for professional help with therapy and/or physician prescribed medications can lessen the chances of drug abuse in individuals struggling with paranoia.

Extra warnings of addiction with opioid use in Utah

HIV and Drug Abuse in Women

Verify Insurance
Drunk Driving Is my loved one developing a mental illness?
Scroll to top