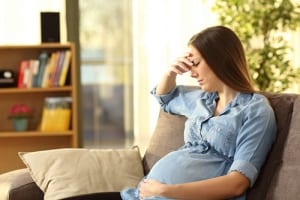 Abusing drugs anytime is risky, but when pregnancy is in the cards, abusing drugs not only impacts you but also your unborn child.  Drug abuse during pregnancy can result in deformities, low birth weight, miscarriage, premature labor, placental abruption, and even infant or maternal death.

Different drugs impact the pregnancy in different ways.  Below are some common side effects for various drugs during pregnancy:

Heroin: Heroin crosses the placenta to the baby.  It is highly addictive and the baby can become dependent upon the drug.  Using heroin during pregnancy can increase the chances of the following occurring: premature birth, low birth weight, breathing difficulties, low blood sugar (hypoglycemia), bleeding within the brain (intracranial hemorrhage), and infant death.

Cocaine: Cocaine crosses the placenta and enters the baby’s circulatory system.  Cocaine remains in a fetus’s body longer than in an adult’s body. Using during pregnancy can increase the chances of the following occurring: birth defects, placental abruption, and learning difficulties may result as the child gets older. Defects of the genitals, kidneys, and brain are also possible.

Meth: Meth causes both the mother and the fetus’s heart rate to increase.  Using meth during pregnancy can increase the chances of low birth weight, the likelihood of premature labor, miscarriage, and placental abruption and some experts believe that learning difficulties may result as the child gets older.

Marijuana: Marijuana crosses the placenta to the baby.  Like cigarette smoke, marijuana contains toxins that can inhibit the baby from getting proper oxygen supply to grow and develop. Using marijuana during pregnancy can reduce the oxygen supply to the baby, increase the chance of miscarriage, low birth weight, premature births, developmental delays, and behavioral and learning problems.

Many women who suffer from drug addiction and abuse want to know the effects of their drug abuse before they knew they were pregnant.  Talking to a doctor about these concerns is very important and staying free from drug abuse for the remainder of the pregnancy is crucial.