Among the many effects of alcohol — or too much alcohol — can be blackouts. How does that happen?

According to the Washington Post: “Alcohol impairs memory formation, but not in a simple or easily anticipated way, researchers say. There’s no clear cutoff point at which memory will be suppressed. David J. Nutt, a psychiatrist and alcohol expert at Imperial College London, said alcohol blocks the neurotransmitter glutamate, which is essential to memory formation. That typically happens when people are ‘very, very drunk,’ he said.”

Kate Carey, a clinical psychologist at Brown University School of Public Health. said in the post: “In the moment, the person can be functioning normally, with no sign there’s going to be memory impairment. But because those memories never get consolidated and stored, it’s like they never occurred, so you can’t recall them later on. Which doesn’t mean it didn’t happen.”

The effects may be especially pronounced in adolescents. A two-decade-old study showed the effects.

The Alcoholism: Clinical and Experimental Research published a study titled “Impairment of semantic and figural memory by acute ethanol: age-dependent effects.” The study assessed “the acute effects of ethanol (0.6 g/kg) on the acquisition of both semantic and figural memory in a sample of young adults from 21 to 29 years of age using a repeated-measures, placebo-controlled experimental design.”

The results showed the more negative effects on younger adults: “Ethanol significantly impaired memory acquisition in both domains. In addition, the effect of ethanol on three of the four memory measures assessed was dependent on the age of the subjects. Subjects in a young subgroup (21 to 24 years of age) were significantly more impaired in memory measures than those in the subgroup that was 25 to 29 years of age. These results indicate a divergence of the potency of ethanol against memory acquisition across a narrow age range in early adulthood.”

“Drinking Messes with How Our Brains ‘Encode’ Information”

“When it comes to memory, drinking messes with how our brains ‘encode’ information,” William Barr, director of neuropsychology at NYU Langone Health told Popular Science.

The post continues: “There are three stages of memory—encoding, retrieving, and storing. Encoding is how we take in and remember new memories. We have to pay attention to something to encode it so we can later retrieve it from storage, says Barr. That’s why when you’re distracted, or doing something routine like driving home on a normal day, you may not always remember doing it. You ‘black out,’ or have gaps in your memory from drinking, when your brain is not encoding what you’re seeing and doing, so you can’t retrieve those memories later when you’re sober.

Kate Carey, a researcher affiliated with the National Institute on Alcohol Abuse and Alcoholism added: “Essentially, high BACs, and especially rapid rise in BAC that comes from drinking quickly, can interfere with the process of memories being consolidated into long-term memory.” 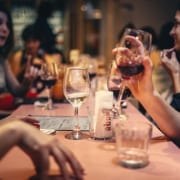