With an eye on marijuana rehab needs, the University of Michigan reports that college students’ marijuana use “was at the highest levels seen in the past three decades in 2016, and that trend remained true in 2017, according to the annual national Monitoring the Future Panel Study.”

Heavy marijuana use among youth not in college is also on the rise, according to the most recent findings from the University of Michigan study. Today’s high levels of marijuana use among the nation’s 19-to-22-year-olds result from a gradual increase over the past decade.

In 2017, 38 percent of full-time college students aged 19-22 reported using marijuana at least once in the prior 12 months, and 21 percent reported using at least once in the prior 30 days. Both of these prevalence levels peaked in 2016, the highest found since 1987, and did not change significantly in 2017. The 2017 prevalence levels represent gradual increases since 2006 when they were 30 percent and 17 percent, respectively.

Same-age high school graduates who are not full-time college students show a similar trend over time, though their use of marijuana tends to be higher; in 2017, their annual prevalence was 41 percent and 30-day prevalence was 28 percent, remaining at highest levels since the 1980s.

Daily or near daily use of marijuana—defined as having used on 20 or more occasions in the prior 30 days—was at 4.4 percent in 2017 for college students. This has remained steady for the past three years, down from a recent peak of 5.9 percent in 2014.

We previously reported that “Marijuana Rehab Needs Continue to Grow.” 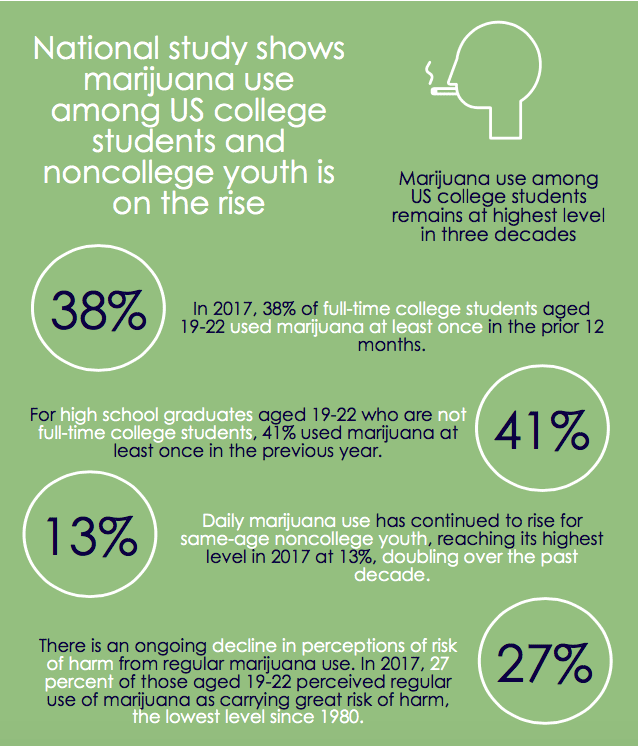