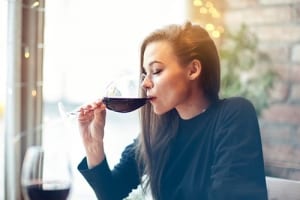 Many of us made New Year’s Resolutions not that long ago to eat less, exercise more, and get healthier.  How are you measuring up?  Recent studies indicate that alcohol may be getting in the way of your goals, especially if you are female.  That is to say, the study, titled The Obesity Society reported that alcohol consumption can increase food consumption in women.

Interesting right?  So many women think that a glass of wine before bed is ok or an occasional alcoholic drink.  However, the study followed 35 healthy women who were given either alcohol or a saline solution intravenously before lunch. Next, after the participants were given either product, the researchers tested their brain food cues through the use of different aromas. Afterwards, they were also given a lunch of either beef or noodles with meat sauce.  Interestingly, the researchers found that the women who were given alcohol responded more to the food aromas than the women given saline. They also found that these women consumed more food than the ones given the saline solution. This means that when women drink alcohol, they are more likely to crave and eat more! In regards to New Year’s resolutions, if a woman is struggling with consuming too many calories, she may want to track her alcohol intake and monitor that first.  Reducing one’s alcohol intake seems to reduce one’s food cravings and calorie consumption overall.

A recent TIME magazine article entitled Here’s Why you Eat More when you Drink, reported that, “women who drank alcohol … ate more cookies. The researchers suggest that the reason the women ate more calories was because their inhibitory control was impaired the study authors conclude that alcohol may be linked with weight gain because the women’s self-control was lessened, not because they experienced heightened cravings. These findings highlight the role of alcohol consumption as a contributor to weight gain.”

In sum, if you’re trying to stick to those New Years Resolutions about weight loss, it may be a good idea— especially for women—to watch the alcohol consumption as well.

What are Benzos? An Interesting Perspective on Guns and Drugs
Scroll to top
Font Resize