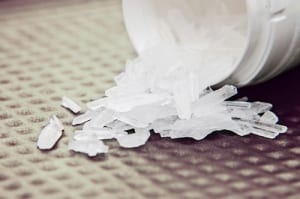 These drug effects generally last from six to eight hours, but can last up to twenty-four hours. The first experience might involve some pleasure, but from the start, meth begins to destroy the user’s life. If you’ve ever seen before and after pictures of meth addicts you know that not only does meth destroy the inside of people’s bodies, it dramatically alters their outside appearance in negative ways.

Meth is an illegal drug in the same class as cocaine and other powerful street drugs. It has many nicknames—meth, ice, glass, crank, chalk or speed being the most common. “Meth is used by individuals of all ages, but is most commonly used as a “club drug,” taken while partying in night clubs or at rave parties. It is a dangerous and potent chemical and, as with all drugs, a poison that first acts as a stimulant but then begins to systematically destroy the body. Thus, meth is associated with serious health conditions, including memory loss, aggression, psychotic behavior and potential heart and brain damage. Highly addictive, meth burns up the body’s resources, creating a devastating dependence that can only be relieved by taking more of the drug. Meth’s effect is highly concentrated, and many users report getting hooked from the first time they use it. (drugfreeworld.org)” Sadly, meth addiction is one of the hardest drug addictions to treat and many die due to it’s strong effects.

Bath Salts Amphetamines: What are they?
Scroll to top
Font Resize