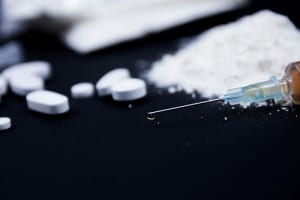 Heroin (like opium and morphine) is made from the resin of poppy plants that predominantly grow in South America and, to a lesser extent, Southeast Asia. Milky, sap-like opium is first removed from the pod of the poppy flower and then refined to make morphine. The morphine is refined further into different forms of heroin.

Heroin is most often sold as a white, pink, or brownish powder that has been “cut.” “Cut” means something was used to dilute the heroin, namely sugar, powdered milk, quinine caffeine or other substances. Street heroin is dangerously sometimes “cut” with strychnine or other poisons. The various additives that have been “cut” into the heroin often do not fully dissolve, and when the are injected into the body, can clog the blood vessels that lead to the lungs, kidneys or brain leading to infection or destruction of vital organs.

Heroin bought on the street carries an additional risk: the user never knows the actual strength of the heroin they are buying. Because of this, users are constantly at risk of an overdose.

Street names for heroin include:

Amphetamines: What are they?
Drugs Don’t Cause Addiction Video
Heroin
Rise in Heroin overdoses in the US
Heroin use on the rise in Utah
Drug Addiction Trends in Utah County
Illegal Drugs in the Workplace on the Rise
Addictions
0 replies