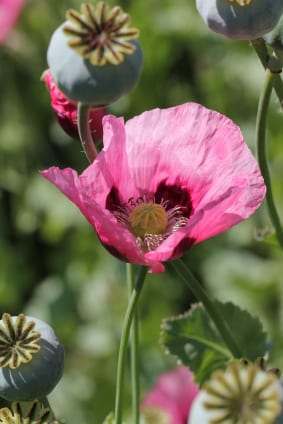 When asked this questions most of us think of poppy flowers, poppy seeds, Asia, or more recently, the drug heroin.  In researching what opiates really are, I came across an article written for teens describing them.  It was basic, very informative, and helped my understanding expand.  It was on the site http://teens.drugabuse.gov.  It states,” If you’ve ever seen “The Wizard of Oz,” then you’ve seen the poppy plant—the source of a type of drug called an opiate. When Dorothy lies down in a field of poppies, she falls into a deep sleep. No wonder the Latin name of this plant—Papaver somniferum—means ‘the poppy that makes you sleepy.’”

So, how do opiates work?

Opiates act on many places in the brain and nervous system, including:

The limbic system (which controls emotions), the brainstem, which controls things your body does automatically, like breathing, and the spinal cord, which transmits sensations from the body.

Whether it is a medication like Vicodin or a street drug like heroin, the effects of opiates (and many other drugs) depend on how much you take and how you take it. If opiates are swallowed as pills, they take longer to reach the brain. If they are injected, they act faster and can produce a quick, intense feeling of pleasure followed by a sense of well-being and a calm drowsiness.

Basically, just like any other drug, opiates have an important purpose in medicine.  However, when abused, opiates are highly addictive and can create difficult withdrawal symptoms and Dorothy (being healthy) should have run as fast as she could down the yellow brick road away from them!